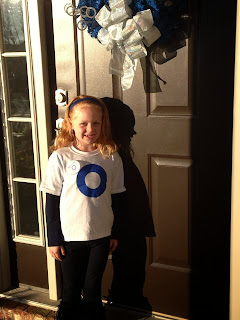 Posted by Redhead Living at 9:25 AM 3 comments:

Meet and Greet with Charlie Kimball

Emerson won a contest sponsored by JDRF and Novo Nordisk, and the prize was a meet and greet with Charlie Kimball on Carb Day at the race track and tickets to the Indy 500.  We are huge race fans and were excited for Emerson to have her first experience at a race and to meet Charlie. 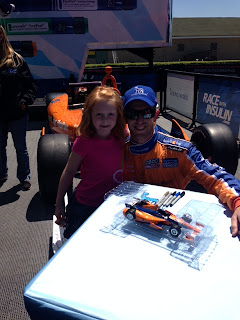 In the meet and greet with Charlie, Emerson received an autographed poster and race car.  She and Charlie even shared CGM sites.  In the picture below, Charlie is pointing to his stomach were he was wearing his CGM sensor.  Emerson was ecstatic about meeting him and getting a blue and orange race car.  Our time with him was very brief but he seemed like a very nice gentleman. 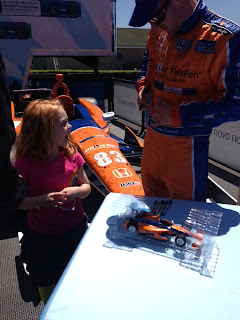 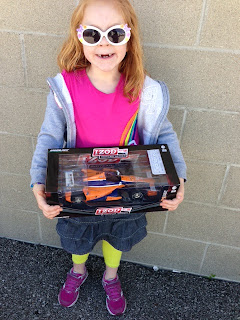 We sat in the Novo Nordisk area at the Indy 500 on Sunday and people were sporting a lot of blue and orange.  Unfortunately, Charlie did not win the race but we hope to see him back in Indy next year. 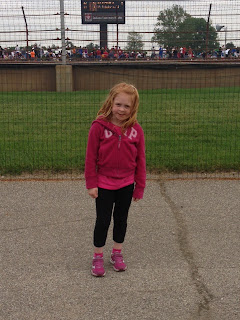 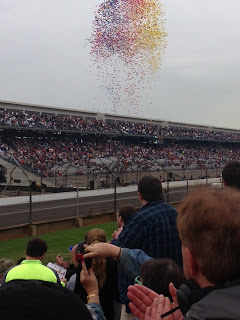 A big thanks to JDRF and Novo Nordisk for a great weekend.  (And a big thanks to diabetes for playing nice for the weekend!)
Posted by Redhead Living at 4:44 PM 2 comments:

A huge highlight for Emerson was that she won Lenny the Lion from Kim at Texting My Pancreas in her "Give All The Things" giveaway.  A big thanks to Kim because Emerson is in love with Lenny and is excited that Rufus has a friend! 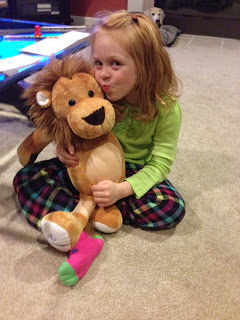 Also, in December, Emerson went live with her CGM which was a good thing for us because we actually had a bad shipment of pods, and we were constantly dealing with HIGH BGs and changing pods in December and January.  We went through twenty somethings pods in a month.  It took us awhile to figure out that we not only had one bad box of pods but four boxes of bad pods.  Luckily, we contacted Insulet and they replaced all the pods (even though that shipment of pods was purchased through another supplier).

Fortunately, at Emerson's quarterly endo appointment in early February, her A1C was just up slightly and she was still within the normal range for her age.  Emerson loves her doctor and nurse so our quarterly visits are usually eventful. 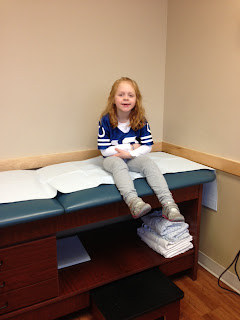 On February 8th, we "celebrated" Emerson's two year anniversary with diabetes.  She wanted to celebrate with a balloon and Dairy Queen.  So, she got a balloon and a huge hot fudge sundae.  Just before we headed to DQ, Emerson had her lowest BG ever (a 34), so after a few stressful moments of waiting for her to come up, it was a perfect night for a sundae. 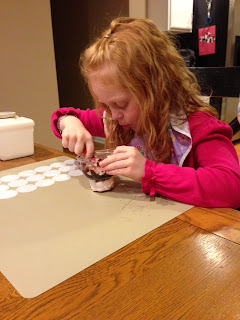 Valentine's Day was good.  Emerson's class had healthy snacks instead of cupcakes and cookies.  She received candy from her friends but she threw some of it away because she said it was bad for her teeth!  I love how responsible my little girl can be.

Hopefully, the rest of the month is uneventful and diabetes cooperates (but as we all know, diabetes rarely cooperates)!
Posted by Redhead Living at 9:59 AM 2 comments:

Last Spring our endo approved a CGM for Emerson.  After thinking about it, we were hesitant to add another device to her body so we kept putting it off.  But when the new Dex G4 was approved, we knew we had to do it...and since it came in pink Emerson was agreeable.  The process of getting it was much smoother than obtaining our pump.  There was absolutely no argument from the insurance company, and we received our new Dex right away.

We finally met with our nurse this week to learn all about it and to go live with it.  Emerson didn't feel a thing when it was inserted, and we were very relieved there was no pain.  (Emerson wouldn't even put her shirt on as we left the doctor's office...she left her arms bare for the world to see her devices.)  Since she has only been wearing it a few days (and this is our first experience with a CGM), we don't have much to say about it other than we all LOVE it so far.  Hopefully, we can give our thoughts on it once we get our feet wet.  In the meantime, if you have any tips or tricks to share on Dexing, please send them our way.  We would love to hear from you! 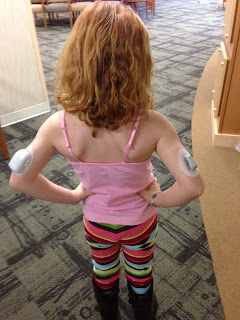 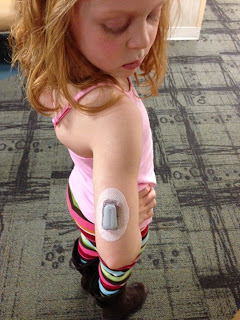 the JDRF Walk to Cure Diabetes t-shirt contest.  The theme was Treasure the Cure, so my brother designed our shirts to include a pirate, map, treasure chest, and a CURE (thanks Uncle Jason). 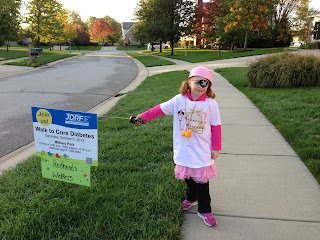 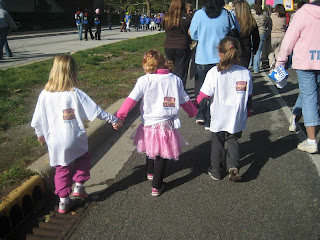 Although it was a chilly morning, we had a great turn out for the walk.  A big thanks to everyone who supported Redhead's Walkers! We truly appreciate your kindness and generosity! 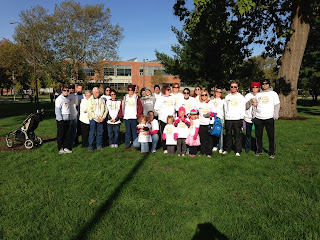 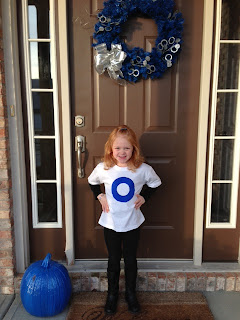 Emerson is proudly wearing a blue circle shirt (that we made...thanks Pinterest) for World Diabetes Day.  Her teacher will be reading Disney's Coco and Goofy's Goofy Day.  Most of the kids in Emerson's class know about diabetes because they have been in school with her since her diagnosis, but she has a few new friends so they will learn about diabetes today.

Also, JDRF has partnered with Bob Evans and they are donating 15% of all proceeds from meals to JDRF today.  If we can fit it in our schedule, we will be dining at Bob Evans tonight (I love it when I don't have to cook)! 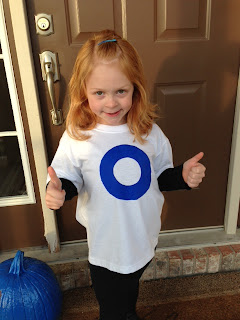 Our local JDRF Walk to Cure Diabetes is this weekend, and we have been busy preparing for it.  We have nearly 30 walkers this year and can't wait to show off our team shirts.  The walk theme this year is Treasure the Cure and the kids (and probably some adults too) are dressing up likes pirates.

Emerson is extremely excited for her walk and asked if she could draw a picture asking for donations and  hang it on our door (although I'm pretty sure our UPS man will be the only one to see it).  As you can see below, she proudly displayed her sign that reads "Will you donate to my walk.  Love Emerson" and continues at the bottom with "My walk theme is a pirate."  We are also displaying one of our Diabetes Awareness wreaths (to see our Etsy shop, click here). And lastly, we displayed a yard sign that was provided by JDRF this year.  We hope to have a great walk this weekend and will post pictures soon! 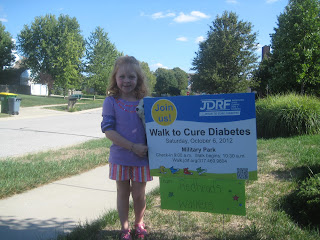